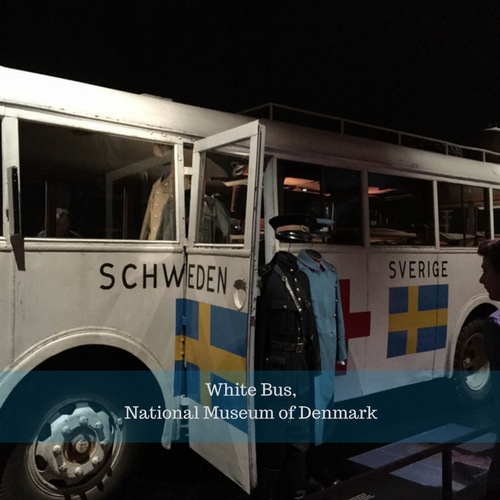 The White Bus Exhibit  in Copenhagen at National Museum of Denmark, puts the emphasis on all the volunteers who risked their lives by traveling into war-torn Germany to save unknown human beings in need.

Exhibiton: 20 June 2015 – 28 March 2016
70 years after the operation with The White Buses, we are opening a large special exhibition about the buses that evacuated 17,000 people from German concentration camps during World War II.

This rescue operation is not particularly well known, and therefore on its 70th anniversary, the National Museum wishes to tell the story of the buses and the drivers, doctors and nurses who went on the dangerous expedition.

The exhibition will also focus upon the concept of citizenship and discuss the dilemmas that can face citizens of a society. Therefore, the exhibition is not only about how citizenship was displayed during World War II – it will also ask the question: how are we good citizens today?